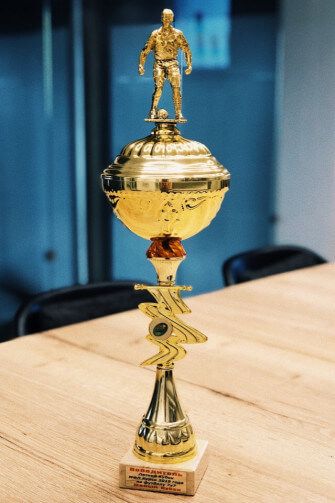 On Sunday, July 27, the final football match of the Kursk 2019 IFF Summer Cup 7X7 was held. Our amateur team “Cesky Lev” defeated the “Granite” team with a score of 2: 0!
It should be mentioned that the amateur football team “Cesky Lev” was gathered in 2016, with the support of the brewery Cesky Lev in order to maintain mass sport and a healthy lifestyle in general. The backbone of the team has always been company employees. Over the years, the “Cesky Lev” (football team) has participated in many IFF Championships. Each season, the players ranked among the top ten football players. We wish the team to obtain new achievements and, of course, the best luck in the World!
Sales department
info@forpost-kursk.ru
Mon - Fri from 9 a.m. to 6 p.m.
Sat, Sun - day off
Banking Details
18P, Magistralniy passage, Kursk, Russia
+7 (4712) 735-800
Kursk brewing
company Cesky Lev